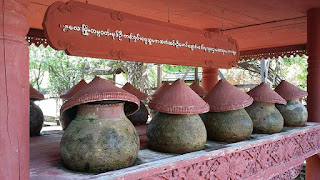 Our motivation to go to Myanmar (Burma) was inspired by a Top Gear program before Jeremy Clarkson disgraced himself. He still remains a favourite despite his outspoken ways. I had one eye on the TV, my nose in the computer. Rob piped up that Myanmar appealed to him. Despite numerous appeals to go somewhere new I could not get him to commit. I grabbed this opportunity and before Jeremy could say ‘Mingalarpar’ (hello) I had found our perfect itinerary thanks to Backyard Travel (Asia).

We jetted off in September via Hong Kong. Surprisingly, the air fare was not crippling, but the cost of our two week stay in Myanmar was pricey. The main appeal was sailing down the Irrawaddy River from Mandalay to Bagan. I have had enough of long days stuck in a vehicle on bad roads. This is how I wanted to travel. It has ruined me for life, because this is going to be my modus operandum from now on.

We arrived in Yangon at midnight. The new airport is under construction and looks hugely impressive. Yangon was asleep, it had rained and we had the silent roads to ourselves. A totally contrasting impression to the Yangon we encountered during the day. We arrived at the Kandawgyi Palace Hotel and were treated like royalty. Throughout our travels we were made to feel very welcome, we enjoyed the Burmese people and were impressed by their hospitality. In spite of their violent and chequered past they have embraced their role as major players in the tourism industry. All our guides from Back Yard Travel were excellent. Our driver in Yangon was hard work, we named him ‘Good Johnny’ as we didn’t quite catch his name and were too intimidated to ask again. We struggled to get a smile out of him, but by the end of the day he showed some signs of thawing. 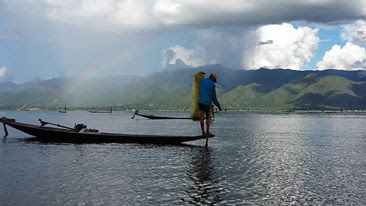 Our itinerary included a couple of internal flights with Air KBZ. There were no delays, no falling out of the sky and smooth landings. We were impressed with the service. We flew from Yangon to Heho to spend 3 nights at the Inle Resort & Spa. Our guide Myo was wonderful, knowledgeable and put up with our requests for authentic food, a place to find gin and Myanmar beer. For two and a half days we skimmed the waters of Lake Inle.

We saw the floating tomato farms (fascinating for us, as farmers), silk and lotus weaving factories, morning markets where we ate as much street food as possible (and didn’t get Dehli Belly), watched in awe as the leg-rowing fishermen went about their cumbersome way.

We ate at the Golden Dragon, drank Myanmar beer, had a cooking lesson with a local family, bought silver jewellery, played with

Burmese cats at their sanctuary and visited golden stupas. We hesitated going to the sunken stupas of Sagar as it was a 3 hour journey by boat. It seemed a long way to go, the boats are not the most comfortable and the noisy engine can drown away the most peaceful thoughts. But I am glad we did it. The area is not over-subscribed by tourists, probably because it is part of the opium trade route!

Next stop was Mandalay. Our guide Lin was like a breath of fresh air. He was full of fun, and clearly loved his job. And we loved him. We travelled in September, on the cusp of the high season, and it was as hot as a red chilli. One advantage was the low number of tourists, but at times the heat sucked every ounce of energy from our exhausted bodies. Shoes have to be removed at temples and tourists are easily spotted hopping from one shadow to another.

Sunset at Mandalay Hill was magnificent. We opted out of the 900 stair walk and drove almost to the top to watch the sun set over the swollen Irrawaddy River. Young monks took advantage of our presence to practice their English. A lot was lost in translation but we loved their enthusiasm. We made our own marionettes – Christmas presents for the grand-daughters (one problem solved).

We watched in awe as young men pounded gold leaf as fine as skin for hours, and visited the Mahamuni Pagoda where Rob added his golden contribution to the Buddha (women are not permitted to do so.) We visited the World’s Largest Book at the Kuthodaw Pagoda and caught our breath under the shade of a bodhi tree.

In Mandalay we boarded the Sanctuary Ananda. Talk about Nirvana. This five star boat was our home for the next 4 days, and it took a lot of will power to leave it in Bagan. Everything about it is excellent. The accommodation is luxurious, the food exquisite, the excursions just long enough to make you want to return ‘home’, and the staff were amazing. The Irrawaddy River was full to bursting from

the recent floods and the boat floated lazily from destination to destination. We stopped at Amarapura, walked the U BeinBridge, drank champagne in gondolas on the Taungthaman Lake. We bounced in ox carts along bumpy roads to the unfinished Mingun Pagoda.

We learnt how to wrap ourselves in knots in our longyis and paint our faced with thanaka. We had cooking classes with Chef Sumat (who nearly came home in my suitcase), and learnt the history of Myanmar with our host, Tim Buma (who is also a South African). Our last night was on the shores at Bagan where we had dinner under the stars on the muddy banks of the Irrawaddy. If I ever run away from home, this is probably where you will find me! There were only 13 people on board (40% full) and we had a fun, fine time.

We came down to earth with a three star thud in Bagan. It was piping hot and I chose to escape to our mediocre accommodation until the weather was kinder. Rob found a great street café and dragged me out to eat a delicious meal for less than R5….(hardly worth mentioning the dollar value!). We visited an agricultural village called Minnanthu and wandered through homesteads going about their daily chores.

Later on we stopped at numerous temples eventually settling on the upper terrace of Sulamani Temple to watch the sun set over the magnificent plains of Bagan.


One note of caution. As in every destination, where tourists have descended, there is a frenzy of willing vendors wanting to sell flowers, postcards and badly made curios. They can spoil the experience. Despite our inclination to respect their opportunistic behaviour my tolerance wore thin towards the end. 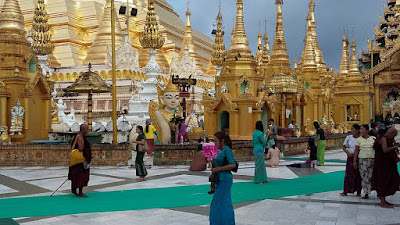 Last stop. Yangon. Back to where we started. I confess that I was pretty exhausted by now. The heat had got to me and the whole experience – the different culture, food and pace – was quite overwhelming. 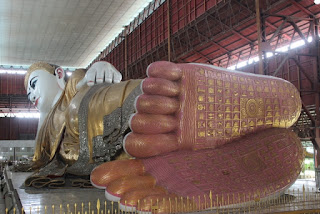 The traffic in Yangon was challenged by ‘Good Johnny’s’ driving skills. We bought curios, and a stunning painting at Scott Market. We spent hours with gaping wonder at the Shwedagon Pagoda (hopping from one cool slab to another) and set birds free (much to my horror) at the colossal reclining Buddha statue at Kyauk Htat Gyi Pagoda. We caught our breath at the hotel poolside over-looking the Kandawgyi Park and prior to our midnight departure gathered our thoughts, our longyis and memorabilia before heading home.

Other blogs by Lois Kuhle:
SMOKE RINGS IN CUBA. A TWO WEEK JOURNEY FILLED WITH SALSA, SUNSHINE AND SILLY PEOPLE: http://smokeringsincuba.blogspot.com/2013/10/smoke-rings-in-cuba-journey-filled-with.html
'LIFE'S COOL'. MY NEAREST AND DEAREST BECAME THOSE THAT GRUNTED, BARKED OR BIT.
http://milimanilifescool.blogspot.com/2013/12/i-n-2002-i-was-lucky-enough-to-be-given.html
COOL THOUGHTS – LIFE IN THE SLOW LANE: http://loiscoolthoughts.tumblr.com/
FOLLOW ME ON FACEBOOK: https://www.facebook.com/loiskuhlescribbler


WEBSITE: https://sites.google.com/site/loiskuhle/
Posted by LIFE IN THE SLOW LANE at 03:13